8.1 The problem of uncontrollable variation 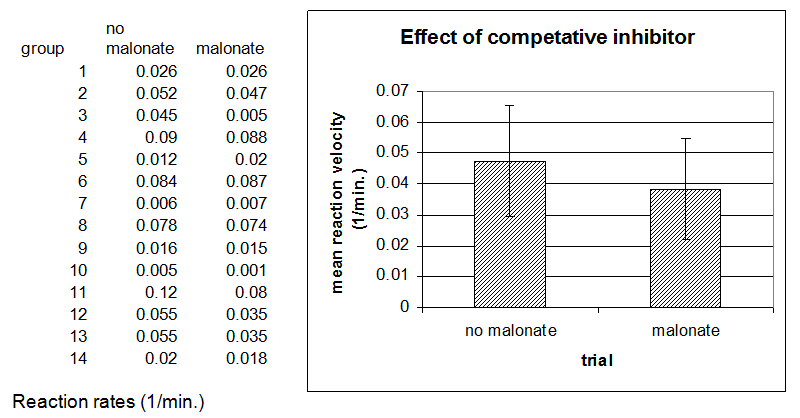 For example, in an enzyme activity experiment students were given aliquots of cauliflower mitochondrial extract.  The aliquots were then split to run two reaction rate trials.  In one trial, a competitive inhibitor (malonate) was added to the extract.  In the other (control) trial, no malonate was added.  The experimental factor (presence of inhibitor) was expected to cause a reduction in the reaction rate.  If you examine data collected by one section of students (Table 1), you can see that the malonate trial of a particular group usually had a lower reaction rate than the control trial for that same group.  However, because each pair of measurements was collected by a different group of students using a different aliquot of mitochondrial extract, there were undoubtedly idiosyncrasies in the way that each group's pair of data were collected (e.g. the way they read the instrument, prepared the cauliflower extract, etc.).

The large amount of variability among measurements made by different students introduced a large amount of uncertainty about the mean reaction velocity for each of the trials.  This is reflected in the large 95% confidence intervals shown in Fig. 17.  As you might expect, a t-test of means shows no difference between the treatments (t=0.709, df=26, P=0.485).  This may seem surprising given the fact that malonate is a well-known inhibitor of this reaction.

The problem is that we are not doing the best kind of statistical test for this situation.  Recall that one consideration in statistical power (the ability to show differences when they are real) is using the most powerful test applicable to a particular situation.  A regular t-test of means considers all of the variation that exists among measurements used to calculate the means, including variation caused by differences in the way students conducted the experiment - a factor that we do not want to consider in the analysis of the experiment.  It would be better to use a test that assesses whether the differences between pairs of measurements collected by the same students are significantly different from zero (i.e. if malonate reduces the reaction rate, then in general a no-malonate trial minus its corresponding malonate trial should be negative, and therefore different from zero).  Such a test is called a paired t-test.  (Note: Although the "t-test" and "paired t-test" share parts of their names, they are really two completely different tests, with different methods of calculation.) Essentially, a paired t-test finds the difference between each datum in a pair and then tests whether the mean of these differences is significantly different from zero.  This test is easily done using the statistical capabilities of Excel.  The result of a paired t-test of these same data produces a barely significant result (t=2.21, df=13, P=0.0453).

Note: to calculate the descriptive statistical values in this section, you must have enabled the Data Analysis Tools in Excel.  Go to the Excel Reference home page for instructions for PC and Mac.