The following simulation of sampling is recommended to help you understand the concept:

Thanks to Mike Whitlock and Dolph Schluter, authors of the statistics text used in the Biostats class here at Vanderbilt: The Analysis of Bological Data.

In addition to the technical and mathematical components of experimental science there is also a major economic component.  If the quantity we want to study is the mass of all laboratory mice on earth, it is clear that we have neither the time nor money to measure all members of that population.  So an important question in nearly every experiment is "how many replicates should I measure" (or how many trials should I conduct, etc.).  More is almost always better, but how many is enough?  There is no simple answer to this question, but an understanding of the phenomenon of sampling and the statistics associated with it is a first step toward developing skill in designing successful experiments.

The term population describes all of the possible members of a group (or outcomes of a particular treatment, etc.).  Often our goal is to know the mean of a population, but this is almost never possible because there are usually too many individuals to measure.  Instead, we depend on measuring samples that are a subset of the population.  When we calculate the mean of our sample, we hope and assume that it is similar to the population mean (also known as the parametric mean).  However, the extent to which that is true depends on which individuals we sample.

Because of limited time and resources, some scientists (not omniscient!) are only able to randomly sample and measure 16 of the individuals. 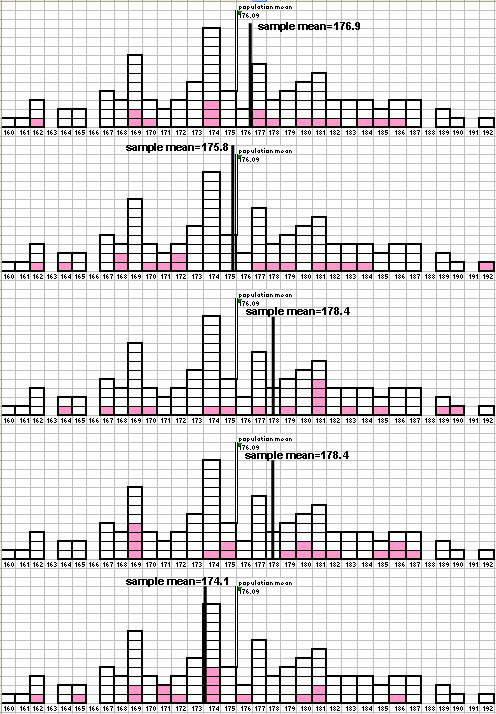 Fig. 4 Five samples of 16 from the H. sapiens population of Fig. 3, and their means

The individuals that they sample are shown as the shaded blocks in the first histogram at the top of Fig. 4.  They calculate a sample mean of 176.9 cm, which is pretty close to the true mean but a bit on the high side.  As we are enjoying our godlike status as the creators of this simulation, we exert our omnipotence and make time run backwards so that we can see what happens if the scientists conduct their experiment again.  The second time, they get lucky in their sampling and calculate a mean of 175.8 cm - remarkably close to the true mean!  Even though they happened to sample the tallest individual in the population, they sampled several of the shorter members, which canceled out the large deviation from the mean.  On the 3rd through 5th tries, the scientists aren't so lucky and they calculate sample means that are too high (tries 3 and 4) or too low (try 5) because by chance they sampled individuals that were less representative of the population than in the first two tries.

We now tire of the novelty of controlling an artificial universe and devote ourselves to the more practical task of answering the following question: is there a way to predict how close sample means will be to the true mean if we measure a certain number of samples?  Based on our experiment on the scientists, we can assess the variability in sample means by taking the standard deviation of the 5 means that the scientists collected.  The resulting standard deviation of those means is 1.82 cm.  The standard deviation of many means, each resulting from a certain number of samples, is given the special name: the standard error of the mean (or S.E.).

What does this number mean?  It means that if someone measures samples of 16 from our population of humans, about 2/3 of the time their sample mean will be within 1.82 cm of the true mean.  That is useful information, but only in our particular situation.  It would be better to have a more general way to predict how close sample means are likely to be to the true mean for any population.  The method of prediction would need to consider the standard deviation of the population because a more variable population would make it more likely that atypical individuals would be sampled.  It would also need to consider the sample size, because the more samples that are included, the more likely atypical individuals would be to have their deviation cancelled out by another individual that is atypical in the other direction.

It is possible to estimate the standard error of means derived from a certain number of samples (without actually sampling a lot of means and finding their standard deviation) by using the formula:

There is a tendency on the part of students to confuse standard deviation and standard error of the mean (because they both have the word "standard" in their name??).  But it is important to be clear about the nature and use of these two statistics.  Standard deviation describes the variability of individuals in the population itself.  Standard error describes how much sample means are likely to vary from the true mean. In the Witlock and Schluter kingfisher sampling simulation, the distribution of the population can be shown by clicking on the "Show Population" button.  Click on that button, then slide the sigma slider back and forth to see how the population changes when the standard deviation changes.  The distribution of sample means can be shown by clicking on the "Show Sampling Distribution" button.  Click on that button and slide the three sliders (n, mu, and sigma) to see how they affect the standard error, which is represented by the width of the sampling distribution.

In reporting the results of an experiment, you are likely to see either of these statistics, and often both.  Standard deviation is given if experimenters want to give an indication of the spread of the data they have collected.  Standard error is given if they want to indicate the level of confidence that they have in their estimate of the mean.