In the Fig. 2, you can see that the relative frequency was calculated by dividing two other cell references in the spreadsheet.  This is preferable to dividing the numbers themselves, since this allows you to change the actual absolute frequencies and Excel will recalculate all of the other values without further action on your part.  Note the use of dollar signs in the cell reference to create an unchanging reference to the total counts, so that the formula in F5 could be copied into F6.  This doesn't save much time in a 2x2 table, but might if there were more than two categories.

Step 2. Calculate the expected absolute frequencies for combinations.  Create a second table to hold the expected absolute frequencies (Fig. 3).  The spreadsheet shown in Fig. 3 combined the steps shown in Tables 12 and 13 by calculating the joint probabilities and multiplying by the total count in a single formula (shown for cell C13).  Again, note the use of dollar signs to hold row or column references constant when the formula is copied.  This allowed a single formula to be used for all four cells in the second table. 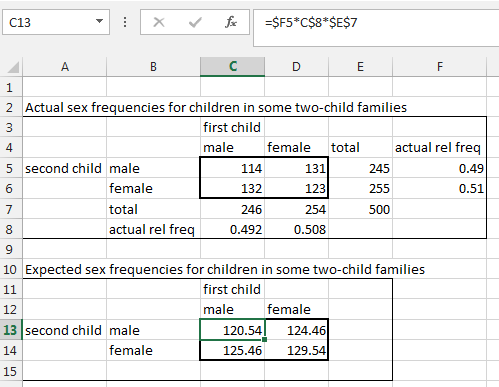 Fig. 4. Calculation of the chi squared value for the contingency test 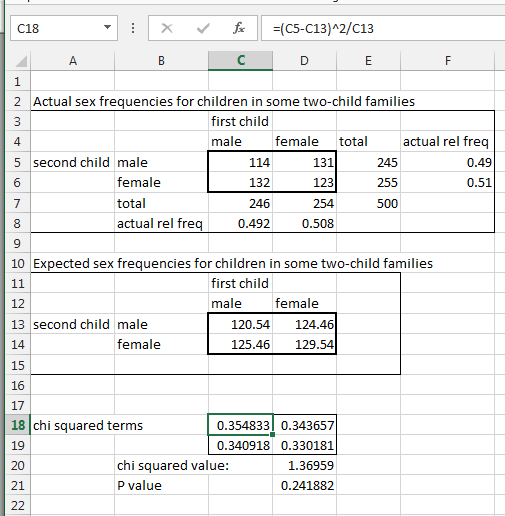 Step 4. Calculate the P-value. The P-value for the contingency test was calculated in cell D21 (Fig. 4) using the CHISQ.TEST function as in section 1.5 .  The difference in this case is that the parameters of the function ranged in two dimensions (rows and columns) rather than one (rows only), producing the formula =CHISQ.TEST(C5:D6,C13:D14).

Step 5.  Report the results. It is standard practice to report the value of the statistic, the number of degrees of freedom, and the P-value.  In this case, the results could be reported as follows:

There is no reason for the tested relationships to be limited to two states per factor.  For example, one could test whether the factor "outcome of a dice roll" (states: 1 through 6) depended on whether it was rolled by a professional gambler or a normal test subject (factor "type of person rolling" with states: "gambler" and "normal").  In this case, the contingency table would be 2x6 and the number of degrees of freedom would be (2-1)(6-1)=5.  The setup in Excel would be the same as in section 2.4 except that there would be 6 rows instead of 2.